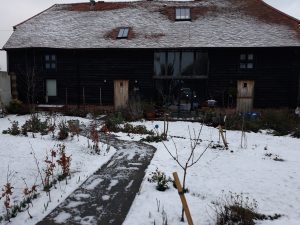 When I moved to Hayling (January 2012) my husband said it never snows on Hayling. Since then we have had snow every year, in 2013 we were dog sitting for my parents and the snow was so deep Bertie was up to his shoulders in snow.

Last year the ‘Beast from the East’ came just as I had started to move plants from greenhouse to cold frame, and from cold frame to outside. I remember frantically reversing the process as the snow was falling, everything going back to as warm as I could get it. I couldn’t move in the greenhouse for cuttings that should have been being hardened off. So in autumn despite the mild weather I invested in a electric tube heater and a thermostatic plug for it. If the green house gets to 2 C it kicks in and takes the edge off.

At the moment everything is still tucked away in its winter beds, either braving the outside under the pergola, or tucked into the cold frame. The super tender things that I lost last year (Salvia discolor) I took many cuttings of and they have been tucked away in the greenhouse for months. I will probably have lost the one I had on the patio, but it was beautiful for so long I would rather take cuttings and keep enjoying the one outside till the last minute than hide it away where it cannot be enjoyed.

A few things are still in flower, or leaf, although the recent frosts and cold weather has sent most of them to bed.  I may lose some of the Pelargoniums  or at best find they are very slow to perform this year. but for the most part the snow in January is part of the course and not unusual in our climate.  I may change some of the planting round this year, pot up some more of the scented Pelargoniums and move them to the greenhouse much earlier, we shall have to see what this year brings.